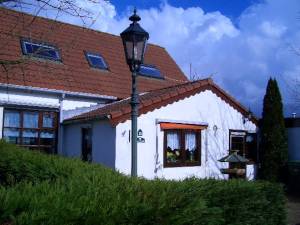 How did we come to move from Noordwijk to De Ruigenhoek? We tell that story in this blog. In 2005 my parents decided to move into an apartment. My father had difficulty walking and it became too much for them to continue living on the farm. Jan and I had no intention of moving to the Ruigenhoek in the beginning. My parents lived beautifully, but the building was not in a very good condition. And I always found it very dark at night with the barns and stables. 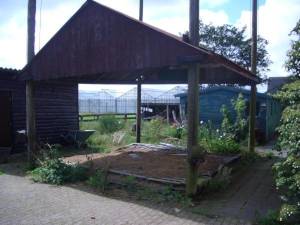 As time went on, it started to itch a bit. What ... if we were to move to De Ruigenhoek, what would that be like? And so it was that we, often late into the night, “I'm leaving” plans made, with budgets and how to proceed? We were able to convert the farm, my parental home, into one house and we were allowed to build a new house on the plot. We really wanted to live in the new house, but what was the function of the farm? We slept on that many nights Oh yes, I wanted to move to the Ruigenhoek, but ... then I wanted a big dog. That became our Casper, a beautiful Hovawart, which we had a lot of fun with. We had a miniature schnauzer, Milos, who also walked around here. Together they were good yard dogs, doing their job well by barking when someone entered the yard. My decision to move was that I was in Morzine, a mountain village in France. I sat there on a roof terrace looking out over the alpine meadows and waiting for the taxi to go back to the Netherlands. Then I thought “Mmm, in the Netherlands I can also have such an expansive view if I move to De Ruigenhoek”. So the seed was planted with me to move anyway.

To round out the financial picture, Jan wanted to sell the farm in the first instance, I didn't want that because it was my parental home. During a meeting, Jan got the bright idea to turn it into a large holiday home. And made in such a way that it would not be a group accommodation, but a cozy house where you could spend the night with your family or group of friends. It had to be a house where people would reconnect with each other, just like we used to at our home, where I have fond memories of the family feeling. No sooner said than done. Well, done that… that's not quite true. The farm has been completely gutted and rebuilt. My parents had once a fire on the top right side, so that side was ok. However, the left side was very bad, so bad that the whole roof has been taken off on the left. Hence the title of this blog “HELP! The roof is going off." We had not counted on that financially at all and that was a major setback. Well, you also have to experience setbacks, that makes you strong. 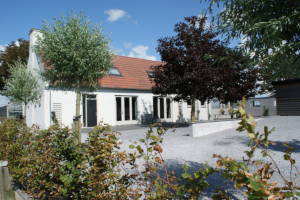 And now… we are very happy with our estate. It took many years before we got the garden around our house and the farm in order. We did that bit by bit. If you live here, you will only feel what you need in terms of terrace and garden. And what we really like is that we can hit a golf ball in our garden. We are completely addicted to the game of golf, so that is a very nice hobby for us, especially because we can practice here.

And so we live happily ever after.