We lived happily and quietly with our three girls in Noordwijk. The sea and the beach, that I love so much, on walking distance. Our house only just had been renovated once more, and the result was beautiful. Finally, I could sit back, look at the wonderful result and start enjoying a quieter life. That was necessary, with a husband who owns a paramedical centre in Noordwijk, my own job at a training institute and three children, that were born within 3 years. Pfff, how I was ready to do absolutely nothing. But then you don’t know my husband. He is always full of ideas, I have my share of that too, but he always surpasses me. So, … when my parents decided to sell their farm, so they could move to an apartment, at first, there was not even the slightest inclination to move to Ruigenhoek. Really, not the slightest. We had settled down in Noordwijk, which felt like home to us, we enjoyed living there and we very much wanted to live our lives there. 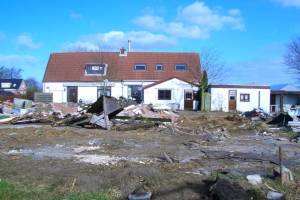 But then, I had better not be married to Jan van der Zwet. At some point a seed was sown and that seed already had started to grow when he told me about it. ‘Mariek, what about us living in the farm in Ruigenhoek?’ I felt like if I had an electric shock, every fibre in my body was screaming “NO, NO, NO, I DON’T WANT TO AND I WON’T DO IT”. I long for some peace of mind and body. I have done more than enough renovations for the rest of my life. I AM NOT UP TO THIS. Besides, do you know how scared I used to be on the farm, in the evenings? Whenever I went out for a night in Noordwijk, on my return, I had to walk down the lane to my house. It wasn’t really walking what I did. They should have timed me for the 100-metre run, for I just as well had broken some kind of record. When I finally would reach the farm, on my rather high heels, I still had to get past dark barns and even more shady sheds and by the time that I found the key where they had left it for me, I must have had a heartbeat of 200 …. NO, NO, I DON’T WANT TO AND I WON’T DO IT. So, that’s it and you just see what you do with it. I was done with it.

Of course, you can already see it coming … we were going to move anyway, otherwise I wouldn’t be writing this story. I would like to share with you why I changed my mind. I was on holiday with my sisters, my mother and the sisters of my mother, in Morzine, in France. Very enjoyable! We stayed in a beautiful apartment, made some walks through the mountains, had – even though it was summer – delicious hot chocolate with whipped cream, in a mountain hut and enjoyed breathing in the fresh mountain air. It also was a special holiday because my mother never spent holidays with her sisters anymore. At that time, they already were in their late seventies, early eighties. So far, so good, life was pretty sweet right then. And then something happened that I certainly will never forget. You see, that apartment had a wonderful roof terrace, offering a phenomenal view of the alpine meadows. I sat down there, gazing at the alpine meadows, while waiting for the taxi to take us back to the airport. It was as if the sun broke through in my head, giving me space, and I was thinking by myself: wow, I could also enjoy such a beautiful view at Ruigenhoek. There, I could easily gaze for at least 5 km across the meadows. That thought made me feel very tranquil and peaceful. Then and there, the ‘moving’ seed had been sown in me as well.